Dr. Shireen Lewis is the Executive Director of EduSeed and Founder of EduSeed’s SisterMentors program. She has devoted over 20 years to mentoring and coaching women and girls. Dr. Lewis has received many awards for her work, including honorary degrees from Rutgers University and Hollins University, a Women Making a Powerful Difference Award from Ebony magazine and Pine Sol, and the Honorable Annice M. Wagner Pioneer Award from the Bar Association of the District of Columbia. Dr. Lewis was honored as a Distinguished Alumna by Douglass College, Rutgers University and inducted into the Douglass Society, the highest honor Douglass gives to its most distinguished alumnae. In honoring her, the Dean of Douglass College and Board of Directors of the Associate Alumnae of Douglass College identified Dr. Lewis as a role model for future generations of women. Dr. Lewis has also received an award from the National Association of Women Lawyers for her work on behalf of women law students.

Dr. Lewis was Dean and teacher of a high school for girls in Trinidad and Tobago. She has helped raise funds for a teenage pregnancy program at a high school in her home town of Fyzabad, Trinidad and for the first school in a village in Tibet which has the unprecedented requirement that fifty percent of its students must be girls. She has served on the board of several community organizations in the United States that promote education and equity for women and girls. She is past Co-President of the Washington, D.C. branch of the American Association of University Women and was a 2013-2014 panelist for the American Association of University Women’s Community Action Grant. Dr. Lewis is actively involved with the Washington, D.C. area alumnae of Douglass College.

Dr. Lewis’ scholarship and teaching are in Francophone West African and Caribbean literature. Her book titled, Race, Culture and Identity: Francophone West African and Caribbean Literature and Theory from Négritude to Créolité (Lexington Books, 2006), is the first comprehensive study of the relationship between Négritude, Antillanité and Créolité. Her scholarship interrogates black identity as theorized by black Francophone intellectuals, including Léopold Senghor, Aimé Césaire, Paulette Nardal and Patrick Chamoiseau.

Dr. Lewis is the first scholar to write a full biography of Paulette Nardal, the Martinican woman intellectual and activist. In her book, Dr. Lewis documents Nardal’s life in Paris in the interwar period and her contributions to early modern black Francophone literature and Nardal’s later work in Martinique promoting the social and political advancement of women through her review, La Femme dans la Cité. Dr. Lewis’ article, “Gendering Négritude: Paulette Nardal and the Birth of Modern Black Francophone Literature” (Romance Languages Annual, 1999), positions black Francophone women as intellectual contributors to the birth of the Négritude movement. She has also published a biographical entry on Nardal in the Dictionary of Caribbean and Afro-Latin American Biography (Oxford University Press, 2016). In addition to her book and articles, Dr. Lewis has presented her work on Nardal at conferences and on Radio Haiti, located in Port-au-Prince.

Dr. Lewis has taught at several universities, including as Visiting Professor at the University of Virginia. She has presented her scholarship both in the United States and abroad. She is a member of the Modern Language Association, a peer-reviewer for Public: A Journal of Imagining America, which focuses on humanities, arts, and design in public life, and is a former columnist for the Hispanic Outlook in Higher Education magazine.

Dr. Lewis earned her Ph.D. in French Literature from Duke University and her J.D. from the University of Virginia School of Law. She obtained her B.A. in French and Spanish from Douglass College, a women’s college at Rutgers University, where she was inducted into the Phi Beta Kappa honor society in her junior year and awarded the Molière Prize from the French Government for outstanding achievement in French. She practiced law as a litigator with a New York City law firm and volunteered with Legal Aid in Durham, North Carolina. On graduating from law school, Dr. Lewis received the Herbert L. Kramer Public Service Award from the Faculty of the University of Virginia School of Law. She is admitted to practice law in the District of Columbia and the State of New York and is a member of the District of Columbia and New York State Bar Associations.

Dr. Lewis is fluent in French and Spanish and has reading ability in Continental Portuguese. She was born and raised in Pepper Village, Fyzabad, Trinidad and Tobago; has lived in Senegal, West Africa and Paris and Tours, France. She has traveled to Tibet and China and countries in West Africa, Western Europe, and the Caribbean.

Dr. Lewis has been featured on television, including Verizon FiOS, Comcast Newsmakers, MHz Networks and DCTV and in various magazines, including Essence, Ebony, Ms. and DIVAS, published in Paris, France. Her work with SisterMentors is documented in Allison Silberberg’s book, Visionaries in Our Midst: Ordinary People Who Are Changing Our World (University Press of America, 2009).

Dr. Lewis is a certified yoga teacher, has a daily practice of yoga and meditation, and is part of the sangha at Satchidananda Ashram–Yogaville in Buckingham, Virginia. She is vegan. 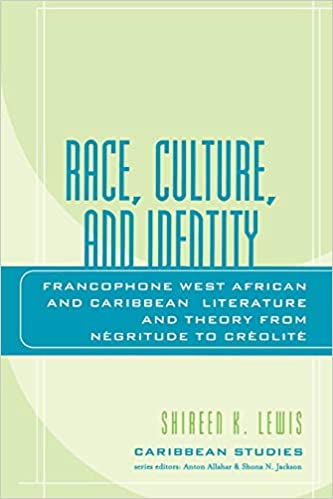 In this groundbreaking book, Shireen Lewis gives a comprehensive analysis of the literary and theoretical discourse on race, culture, and identity by Francophone and Caribbean writers beginning in the early part of the twentieth century and continuing into the dawn of the new millennium.

“Race, Culture, and Identity: Francophone West African and Caribbean Literature and Theory From Négritude toCréolité crosses a crucial bridge from Africa to the Caribbean. The reader travels from postcolonial Afrocentrism to a cross-cultural global perspective. Lewis was the first to illuminate the important position of Paulette Nardal, a Martinican feminist active in the Negritude movement. This dramatic discovery, which reveals black women’s full contribution to Francophone culture, exposes a new world in French literature.”

“Not everyone who’s talking about the space of contemporary black conciousness knows how it evolved. Shireen K. Lewis does. Her analysis of how Black Francophone Caribbean intellectuals and writers made the twentieth-century transition from advocating negritude to trumpeting creolite illuminates our current debates about cultural ‘authenticity’ and multicultural hybridity.”

“An eloquently written and path-breaking analysis of black identities in the Francophone world with significant relevance for contemporary discussions of globalism and the Black diaspora.”

“In Race, Culture, and Identity, Lewis offers. . .a highly readable book. . .that allows the reader to play a role in discovery of another time and place. By demystifying her theme, she presents ideas that everyone can understand about what lies behind the complex world that shapes the destinies of so many.”

END_OF_DOCUMENT_TOKEN_TO_BE_REPLACED 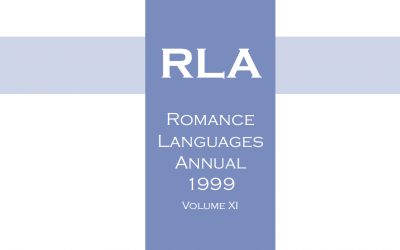 What about the women of Négritude? The Négritude movement has traditionally been characterized and historicized as a literary and cultural movement by black men against the imperialist, masculinist power of the West. There are very few studies that fully explore the...