The educated mind comes at a price: hundreds of hours of research and study; reams of papers; group projects; intensive examinations; conscientious notes from lengthy lectures. And for doctoral candidate students, that’s the easy part, says Washingtonian Shireen Lewis, who earned her Ph.D. from Duke University in North Carolina.

The doctoral process takes, on average, seven to 10 years. Candidates typically finish their course work within three years, which means they can expect to be researching, proposing, writing, editing and defending their dissertations for the next four to seven years.

Lewis says many students prefer the structure of their doctoral course work over the more isolated dissertation process. “You don’t have much supervision,” says Lewis. “You’re out there in the library doing research on your own for hours every day. Such monotony can cause severe burnout in doctoral candidates: 50 percent never earn the title of Ph.D.

In 1997, Lewis was close to her own breaking point. “I was experiencing extreme alienation and isolation while writing my dissertation,” she says even though she was a mere chapter or two from completion. “I decided that there must be other women of color doctoral candidates who were having the same experience and would want to form a support group.”

Lewis shared her concept with Faye Williams and Cassandra Burton, co-owners of Sisterspace and Books, a Northwest Washington bookstore which serves as the sole U.S. specialty outlet for books by and about African American women. They urged her to make the dream of a doctoral mentorship program happen and opened their doors to give the group a meeting space. It was initially called “Sisterspace and Books Dissertation Support Group,” and met once every three weeks.

The organization, which is now known as “SisterMentors Dissertation Support Groups For Women of Color,” encourages women of color toward the dissertation finish line. The group’s vision statement says, “Since we, as women of color, do not generally receive equal support from the academic community, since the academy is often a hostile place for us, and since our intellectual development is often not taken seriously, our aim is to create a nurturing, non-competitive, respectful and intellectual space for ourselves.”

Lewis says that part of the undervalued treatment she and other women of color sense from the academic community stems from the women’s choices of dissertation topics, which often lean toward scholarly explorations of issues pertaining to women of color. The first Tibetan female to receive a doctorate, who is doing so through the encouragement of SisterMentors, studied “Tibetan Woman in the Diaspora.” Lewis, whose dissertation will soon be published in book form, studied “Race, Culture and Identity in Francophone West African and Caribbean Literature and Theory: From Negritude to Creolite.” These specialized topics may not evoke the same passion in a Caucasian dissertation advisor and board as they do in its author.

In September of 1997, four other women of color joined Lewis at the bookstore. A year later, three members, including Lewis, successfully defended their dissertations, followed by three more the following year. “Our vision is that every year at least three women will get their Ph.D.’s. That vision is expanding,” says Lewis, proudly. In 2000, four women from the group completed their doctoral degrees and at least six more are already geared up for the grand finale in 2001. Since its inception, the organization has grown to two different sessions totaling 15 “sisterscholars.” And at least that many women are waiting to join once current members finish their dissertations.

Each SisterMentor session starts with a ritual in which the women are reminded of how far they’ve come and how far they will eventually go with a doctorate in hand. The meeting continues with celebration–a time of encouragement for milestones crossed, such as the selection of a committee or the acceptance of a dissertation proposal. After group announcements, each member shares a status report of her project. This is key–problems with committees, proposals, computer glitches and writer’s block are reviewed, and the members prove that nobody is alone in her setbacks or failures. “Have you thought about this?”, they ask one another. “How strategic are you being in dealing with this problem?”, or “When that happened to me, I tried this…”

Says Lewis, “It’s very interesting to see that light bulb go off, especially with new people, who realize that the wisdom and experience of those who have gone before them shines as the light at the end of their sometimes dark dissertation tunnel.” Members in need of critique provide the group with copies of their work a week in advance of the meeting. That way, members can bring suggestions and encouragement to the session. Each sisterscholar voices her upcoming goals, and the group also reviews long-term goals every six months which helps students stay focused on unfulfilled requirements. Finally, the group adjourns with a closing ritual which reminds members to persevere in their endeavour until the next meeting.

The group has expanded its efforts by encouraging girls from D.C. middle schools to focus their thoughts on staying in school, doing well in their studies and reaching for higher education after graduation. It also serves as a role model by teaching the girls what it means for women of color to earn a Ph.D. In the words of one SisterMentor member, “Let’s demystify the whole process.”

Under Lewis’s continued guidance, SisterMentors has recently become a nonprofit project. The group is ready to grow so that more women of color may join and succeed in their pursuit of a doctorate. Eventually, Lewis hopes to have a budget to rent space for SisterMentor group meetings and to develop a SisterMentor office with a part-time administrative assistant.

Sherri LaReaux is a freelance writer based in Rockville, MD. 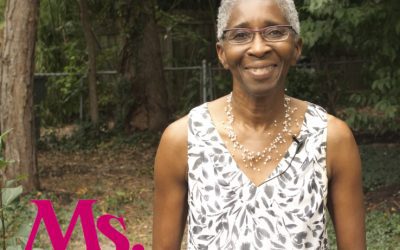